The Greater Hazleton Area Historical Society & Museum (GHHS), founded in 1980, is an educational center and advocate for the architecture, social history, and industrial contributions of Hazleton and its contiguous communities. Our Museum — located in the heart of downtown Hazleton — offers educational programs, guided school tours, and access to our extensive archives and exhibits (photographs, newspapers, and more). Through the Museum, GHHS is dedicated to preserving and interpreting Greater Hazleton’s heritage.

First settled as a mining village in the early 19th century, Hazleton transformed into a melting pot city that innovated mining technology, pioneered the third rail electric railroad, featured the world’s largest silk mill, and encompassed neighborhoods where over thirty languages were spoken in its steeple-lined streets. Its downtown, which remains the region’s commercial core, was a hub for department stores, banking, and vaudeville acts. As the downtown undergoes a revival, GHHS ensures that Greater Hazleton’s heritage continues to thrive in our three-story Museum on North Wyoming Street.

Our Museum is housed in the historic Pioneer Fire Co. building, which once served as Hazleton’s borough hall. Containing the largest collection of artifacts in Northeastern Pennsylvania, the Museum preserves the Hazleton Area’s storied past. Of course, the GHHS relies on donations to carry out our preservation advocacy, educational programming, and continued maintenance of the Museum. In short, as a 501c3 organization, we cannot achieve our mission or operate the Museum without donor support.

GHHS continues to oversee major initiatives, including the launch of the Church Street Historic District project, a weekly history segment on SSPTV, a growing social media presence, and historic walking tours which attract guests from across the Mid-Atlantic. Our revitalization and preservation work shapes community dialogue, but limited financial resources could easily compromise these efforts. As we embrace forward-looking projects, we hope showcasing our region’s history will inspire students and increase civic involvement. None of this is possible without community support.

Please consider a tax-deductible gift to GHHS to ensure that Greater Hazleton embraces its architectural, cultural, and industrial legacy. We thank you for your consideration. 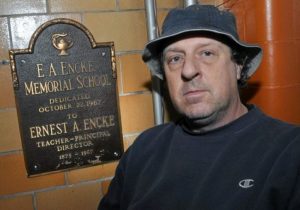 Tom Gabos has served as vice president of the Historical Society since 2008. Tom has been active in preservation efforts in Hazleton for decades. Tom played a critical role in saving “The Castle,” also known as the former Hazleton High School building.

Constructed in 1927, the beautiful brick building was the first school structure to cost over $1 million in Pennsylvania. By the late 1990s, the vacant building had faced the wrecking ball. Tom, along with Robert Tombasco, became known as “the Castle Keepers.” Tom and Robert maintained the building, preventing structural damage from roof leaks.

Tom led a campaign to save the Castle, which was subsequently restored and reborn in 2007 as Hazleton Elementary-Middle School. The Castle is also now home to the Alice C. Wiltsie Performing Arts Center. Now listed on the National Register of Historic Places, the Castle has been used as a case study for preservation strategies by Preservation Pennsylvania.

Tom is a former member of Hazleton City Council. 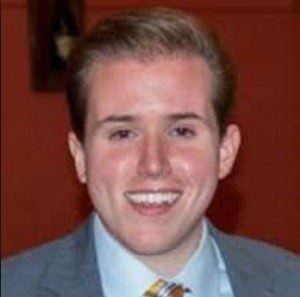 Charles McElwee has served on the board of directors since 2012. He currently oversees the Church Street Historic District project, manages fundraising, and organizes and leads historic walking tours and academic lectures.

Charles has been extensively involved in Greater Hazleton. He serves on the board of directors of the Downtown Hazleton Alliance for Progress, Sophia Coxe Foundation, and Pennsylvania Resources Council. He is the Economic Development Specialist at CAN DO, Inc. in Hazleton.

Charles has contributed to The Atlantic, The American Conservative, The Weekly Standard, and the Hazleton Standard-Speaker. He also films a weekly history segment and serves as a political analyst with SSPTV in Hazleton. A native of Hershey, Charles previously worked in the government and political affairs sector in Harrisburg. He holds a History degree from Lebanon Valley College and a Masters of Public Administration from the University of Pennsylvania.

List of Hazleton historic sites on the National Register of Historic Places: